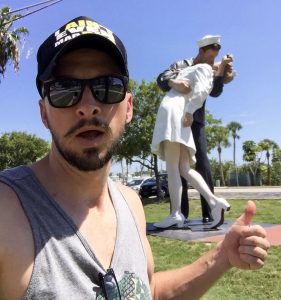 Last week I started the first leg of the first solo tour I’ve done in many years. It’s a modest tour of coffee shops, open mics, and pubs. Some shows pay and others don’t. Sometimes I’m playing to 30 people and sometimes it’s closer to 3. I started the tour uncertain of where I’d be sleeping on a few of the nights. I’d left those nights open as a way to build in adventure. I’m not great with uncertainty or adventure or even with meeting new people, something that happens daily on tour. So touring can be a little uncomfortable for me.

After a few days, while running in the rain, on an island just north of Sarasota, Florida, I suddenly realized that although I’d experienced some discomfort already, I felt strong. Only a few consecutive shows in and I felt completely at ease with the idea of being “on the road”. The low grade anxiety I feel in my day to day life, at the thought of the life I am wasting not playing music or writing songs or recording, was gone. It simply wasn’t there.

There were new worries that had taken it’s place, the main one being “Is this tour going to pay for itself?” I don’t know the answer to that yet. If I’m honest, It’s unlikely. But that worry is accompanied by a resolve that I need to finish what I’ve started. I need to see it through. It’s accompanied by the knowledge that something really good is happening every time I play a show. I can’t describe what that is yet. It’s something I feel. Every time I set up my PA system while the coffee drinkers continue their conversations I feel it. Something valuable is happening here. Each repetition changes me just a little.

I’ve had people ask me, after shows, how they can book their own tour. I tell them what little I know and wonder why they think my intel is valuable. I’m no expert. I’ve been doing this for a half a second. But this thing I feel is real.

It sounds really stupid and I don’t want to type the next thing I’m going to type. But here it is: It feels like I fit here. It feels right. It feels like I’m doing something I’m supposed to be doing. Even though the money is crappy and the couches leave me with a sore neck sometimes. Even though I’m not experienced enough at this yet to say anything concrete. Even though it’s a really tiny tour. In the middle of discomfort and uncertainty, both of which I dislike a great deal, I feel right.

All of that leads me to what I really do want to say, which is a thought I had while driving at some point last week. What we DO matters. For years I’ve been scared to book tours. Tours are scary because of uncertainty and because of discomfort and because of how to pay for them. So for years I’ve talked about making music and I’ve written songs and learned how to record them. I’ve played shows here and there of course but it has always been done “when I had time” or “when the money was right”.

That’s all for now.

One thought on “TALES FROM THE TINY TOUR”

This site uses Akismet to reduce spam. Learn how your comment data is processed.